Rice varieties produced by Akshata was  like an antidote to the three-fold ailments related to Vatha (air), Pitha (bile) and Sema (phlegm) for our ancestors

A significant feature of our Rice Products are that they have a low-glycaemic index while being rich in antioxidant’s.  Our Colorful collection of Rice has been recommended for not only prevention of illnesses but as a cure, the “CharakaSamhitha” (the oldest of the three surviving Ayurveda treatises) and the “SushrutaSamhitha” clearly mentions the therapeutic value of traditional rice verities.

Akshata Rice is harvested by its farming clusters under strict conditions with no use of harmful chemicals, the grains undergo minimal polishing to preserve the rice bran which is an excellent source of flavonoids and ant-oxidants and the naturl pigmentation in the red rice is also preserved as it contains Anthocyanin which offer anti-inflammatory, anti-viral, and anti–cancer benefits.

below our detailed benefits of our Rice; 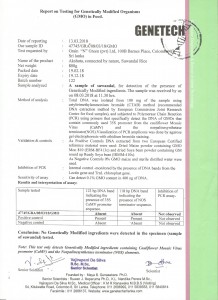 The “non-GMO” claim means that the food is made without ingredients that were derived from genetically engineered organisms.

This proves our claim that our seeds are over a 1,000 years old preserved and handed down through generations.

The Akshata  family consists of  200 Farmers divided into clusters representing hundreds of acres of fertile paddy land. Akshata  works directly with the farmer providing them the seeds, compost organic  fertilizer, technical know-how on sustainable farming and the use of alternatives to hazardous chemicals while purchasing the paddy at three times the price of the normal hybrid varieties of rice.

this brought prosperity to many of our clusters and attracted a younger generation of farmer which is our most proudest achievement.

4) Micronutrient deficiencies/iron deficiency anemia –
affect all age groups in the country & influences the productivity- economic loss estimated 1.1% of GDP per capita, since our verities have high iron content and with low phytates and tannings, it is boosts energy levels5) Helps Reduce/Prevent Fatty Liver –
The researchers, led by David Ludwig, MD, PhD, director of the Optimal Weight for Life program at Children’s Hospital Boston, fed mice either a high- or a low-glycemic index diet. After six months mice on the low-glycemic index diet were lean, with normal amounts of fat in throughout their bodies. Mice on the high-glycemic index diet had twice the normal amount of fat in their bodies, blood and livers.
When sugar melts out of high-glycemic index food, it drives up production of insulin, which tells the body to make and store fat. Nowhere is this message felt more strongly than in the liver, because the pancreas, which makes insulin, dumps the hormone directly into the liver, where concentrations can be many times higher than in the rest of the body. Fat buildup in the liver, or fatty liver, is usually symptomless, but it increases the risk for liver inflammation, which can progress to hepatitis and, in some cases, liver failure.
Which is why LOW GI foods are best for your health and what better meal than our traditional Rice with Low GI.

6) Best Source for Vitamin B –
Since Traditional rice has most of B complex vitamins, Minerals, amonino acid etc., its popularity is fast increasing. The B complex group plays various roles in the body’s ability to produce energy. Our rice contains varying amounts of vitamins B1 through B6
For example Vitamin B6 is essential for the proper maintenance of red blood cell metabolism, the nervous system, the immune system, and many other bodily functions. Over time, a deficiency in vitamin B-6 can lead to skin inflammation (dermatitis) depression, confusion, convulsions, and even anemia. Recent studies also suggest that a diet low in vitamin B6 increases risk of heart attack.
Rice bran contains the most vitamin B6 with 4.07mg per 100g serving, or 4.80mg (240% DV) per cup, 0.3mg (15% DV) per tablespoon. And It is the Number 1 food for Vitamin B6 beating Liver, Tuna, Pork etc!!

7) Its Gluten-Free..!! –
while gluten — a protein found in common grains such as wheat (BREAD), barley, and rye — has been a hot health topic, it’s much more than just a fad, For many people, foods with gluten can lead to severe digestive issues and, over time, serious conditions like diabetes, rheumatoid arthritis, and intestinal cancers

8) Essential for Vegetarians –
Brown rice protein powder provides a supplemental source of dietary protein for vegetarians and/or vegans who cannot use animal proteins. Due to advances in protein extraction methods, brown rice protein can successfully be separated from the grain or starch. A typical product may contain anywhere from 20 to 24g of protein per one scoop serving. Since protein is an essential macro-nutrient often lacking in vegetarians, protein powders can help fill the nutritional gap

9) Allergen Free –
Some individuals simply cannot tolerate egg, milk and soy-derived protein due to allergies. For example, the milk sugar called lactose can cause severe allergic reactions that result in unwanted gastrointestinal side effects like nausea, bloating, diarrhea or vomiting. Traditional rice , contains no gluten, its organic and contains no artificial colors, sweeteners or filler but its tastes and has an Aroma that is exquisite.

10) Muscle recovery –
Muscles are structures made mostly from protein. Intense physical training or simply every day activities cause muscle to breakdown. The body uses dietary proteins to provide the amino acids for rebuilding the muscles, the proteins of Traditional rice are more slowly digested than whey or egg proteins, so its not only better but it also contains all of the necessary amino acids

11) Blood Sugar-
Blood sugar will spike in response to carbohydrate based foods thereby causing the pancreas to secrete the hormone insulin to facilitate the storage of circulating nutrients. Large insulin spikes that result from high or simple carbohydrate-containing meals (e.g. white rice, white bread or sweets) may trigger fat storage and may lead to insulin resistance according to “The Fat Burning Bible” by Mackie Shilstone. This can also lead to subsequent drastic drops in blood sugar which result in fatigue. Having Traditional Rice helps to regulate this blood sugar and insulin effect to potentially prevent body fat storage.

12) Protects from Free Radicals-
Just one cup of brown rice will provide you with 88.0% of the daily value for manganese. This trace mineral helps produce energy from protein and carbohydrates and is involved in the synthesis of fatty acids, which are important for a healthy nervous system, and in the production of cholesterol, which is used by the body to produce sex hormones. Manganese is also a critical component of a very important antioxidant enzyme called superoxide dismutase. Superoxide dismutase (SOD) is found inside the body’s mitochondria (the oxygen-based energy factories inside most of our cells) where it provides protection against damage from the free radicals produced during energy production.

13) Reduces/controls Weight –
People eating Traditional Brown Rice do not put on weight. The high percentage of fiber and lecithin content present in it doesn’t change much into Carbohydrates. Where as the white rice and bread devoid of these contents makes you fat quickly.

In a study published by Harvard Medical School / Brigham and Women’s Hospital,they collected data on over 74,000 female nurses aged 38-63 years over a 12 year period, they noticed weight gain was inversely associated with the intake of high-fiber, whole-grain foods but positively related to the intake of refined-grain foods like white rice/bread etc. Not only did women who consumed more whole grains consistently weigh less than those who ate less of these fiber-rich foods, but those consuming the most dietary fiber from whole grains were 49% less likely to gain weight compared to those eating foods made from refined grains.

14) Rich in Fiber and Selenium-
For people worried about colon cancer risk, Traditional Brown rice packs a double punch by being a concentrated source of the fiber needed to minimize the amount of time cancer-causing substances spend in contact with colon cells, and being a very good source of selenium, a trace mineral that has been shown to substantially reduce the risk of colon cancer.

In addition to supplying 14.0% of the daily value for fiber, a cup also provides 27.3% of the DV for selenium, an important benefit since millions do not get enough selenium in their diets, yet this trace mineral is of fundamental importance to human health.

16) Anti Biotic-
Magnesium, another nutrient for which Tradional rice is a good source, has been shown in studies to be helpful for reducing the severity of asthma, lowering high blood pressure, reducing the frequency of migraine headaches, and reducing the risk of heart attack and stroke.
Magnesium helps regulate nerve and muscle tone by balancing the action of calcium. In many nerve cells, magnesium serves as Nature’s own calcium channel blocker, preventing calcium from rushing into the nerve cell and activating the nerve. By blocking calcium’s entry, magnesium keeps our nerves (and the blood vessels and muscles they ennervate) relaxed. Insufficient magnesium can thus contribute to high blood pressure, muscle spasms (including spasms of the heart muscle or the spasms of the airways symptomatic of asthma), and migraine headaches, as well as muscle cramps, tension, soreness and fatigue.

17) Protective against Breast Cancer:
When researchers looked at how much fiber 35,972 participants in the UK Women’s Cohort Study ate, they found a diet rich in fiber from whole grains, such as traditional brown rice, and fruit offered significant protection against breast cancer for pre-menopausal women.

18) Helps Prevent Gallstones:
Eating foods high in insoluble fiber, such as Traditional brown rice, can help women avoid gallstones, shows a study published in the American Journal of Gastroenterology.
Studying the overall fiber intake and types of fiber consumed over a 16 year period by over 69,000 women in the Nurses Health Study, researchers found that those consuming the most fiber overall (both soluble and insoluble) had a 13% lower risk of developing gallstones compared to women consuming the fewest fiber-rich foods.

we do not label our products as Organic as it is misleading the consumer as no rice grown in Sri Lanka is 100% percent organic as water from nearby paddy fields will most certainly seep in.

The above details summarized below will show how Just one cup of Traditional Brown rice can be substituted for many other foods far more expensive or unavailable in Sri Lanka.

The System of Rice Intensification, known as SRI, can reduce water requirements, increase land productivity, and promote less reliance on artificial fertilizers, pesticides, herbicides, and other agrochemicals, all while buffering against the effects of climate change and reducing greenhouse gases (GHG).

Application of SRI practices by  our farmers have raised household incomes, enhance soil fertility, and protect crops against climatic, pest, and disease stresses.

due to our out-growers best practices the following are the results,

a. Reduce water use

b. Reduce costs associated with farming 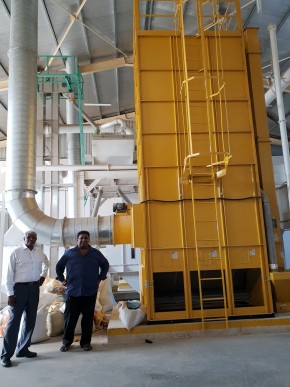 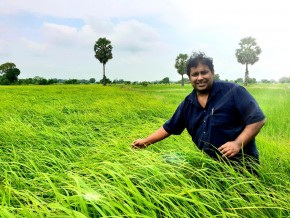 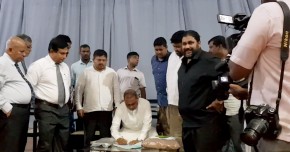 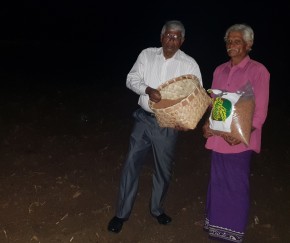 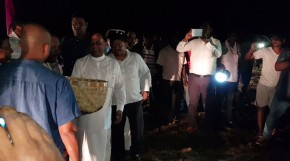